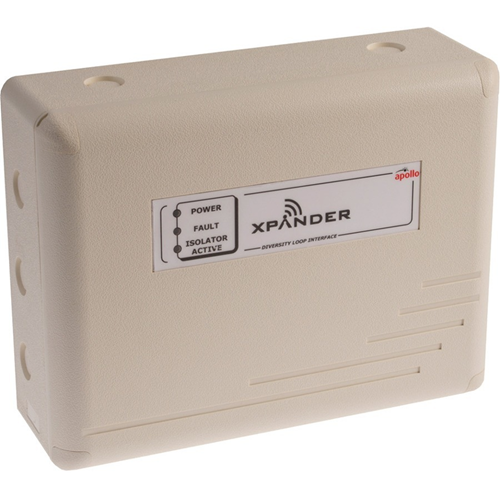 The detectors are multistate in that they report normal, pre-alarm, fire or fault states to the radio base which transmits the information to the interface. The detectors incorporate drift compensation and report any compensation limit occurring.

The XPander Diversity Interface is connected to the loop and provides communications from the control panel to the wireless devices and vice versa.

Features of the XPander Diversity Loop Interface are:

The current drawn from the Interface should be taken into consideration when calculating the total load of a loop.

The XPander interface aerial must be installed at least 400mm away from any metal object. The recommended minimum distance to any electrical equipment is 2 metres in all three dimensions.

An 8-segment DIL switch is provided for the address of the Interface to be set. When polled by the control panel, the XPander Interface returns a pre-set analogue value of 16 in normal condition.

Fire detection systems are life-saving systems and must, therefore, be highly reliable in use. Radio communications have been developed to a point where high reliability can be guaranteed, provided that the rules for the design of radio systems and installation are carefully observed.

Radio communication technology in the detection has matured to the point where a standard has been drawn up as part of the EN54 family of standards for components of a fire detection system. The standard is EN54 Part 25.

The frequency used by XPander is 868MHz which is the harmonised European radio frequency.