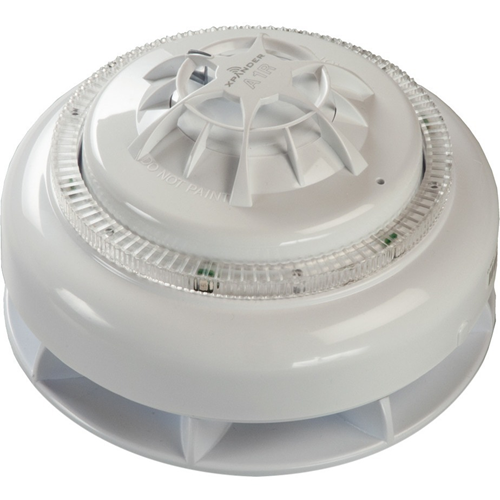 XPander incorporates entirely new designs with respect to the wireless communication system. A Radio Interface is connected to the loop. It communicates with the control panel using the Apollo addressable two-wire power and communications system. The interface communicates with the detection and alarm signalling devices by means of radio waves. The detectors are multistate in that they report normal, pre-alarm, fire or fault states to the radio base which transmits the information to the interface. The detectors incorporate drift compensation and report any compensation limit occurring. The radio bases and signalling devices are addressable and use a pre-set analogue value to report via the XP95 or Discovery protocol. Apart from normal and fire the bases can send pre-set analogue values to indicate low battery, detector contaminated, detector tamper and low signal strength fault conditions.

The sounders and sounder/visual indicators are powered by two packs of batteries, one with three "AA" and one with three "C" size alkaline batteries which provide a working life of typically 3-5 years. The three-year life includes weekly tests and a half-hour sounding in a fire condition.

The Sounder Visual Indicators incorporate audio and visual signalling within one unit.

XPander sounders can be wall or ceiling mounted and use a bi-directional monitored radio platform to communicate. They feature 32 selectable tones, including the Apollo tone, and a self test which causes a fault signal to be sent if the sounders fail to operate. The self-test feature is activated by a DIL Switch. Individual parts may be ordered separately.

The address of a sound or a sounder/visual indicator is set at the commissioning stage by means of an XPERT card.

Fire detection systems are life-saving systems and must, therefore, be highly reliable in use. Radio communications have been developed to a point where high reliability can be guaranteed, provided that the rules for the design of radio systems and installation are carefully observed.

Radio communication technology in the detection has matured to the point where a standard has been drawn up as part of the EN54 family of standards for components of a fire detection system. The standard is EN54 Part 25.

The frequency used by XPander is 868MHz which is the harmonised European radio frequency.

Detectors should be checked regularly at the intervals indicated by the locally applicable code of practice. Apollo recommends that the detectors be checked at least once a year.

If detectors appear not to be functioning correctly they should be returned to Apollo for testing.

If detectors are externally dirty they can be cleaned carefully with a damp cloth using a small amount of industrial alcohol.