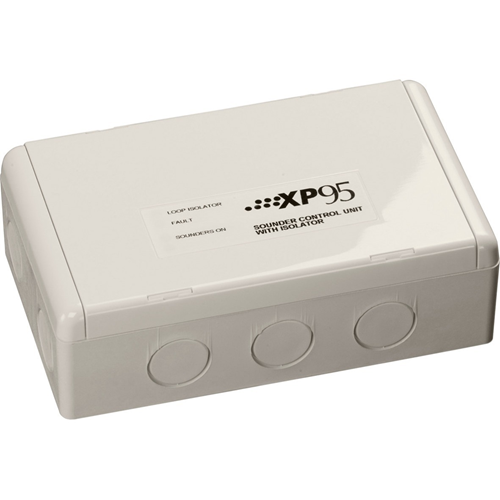 The unit is loop powered and operates at 17-28V DC. It requires a local power supply of 9-32V DC to power the external load, which may be up to 1A. A polarising diode is required with each alarm device, as sounders are operated by voltage reversal, provided by a double-pole change-over relay. The sounder circuit is protected by a miniature (TR5) fuse rated at 1A.

The Sounder Control Unit with Isolator is used to control the operation of a zone of externally powered sounders, visual indicators and VADs and to report their status to Apollo compatible control equipment. The Sounder Control Unit with Isolator allows the devices to be operated continuously or be pulsed, 1 second on, 1 second off. Devices may be operated individually or in groups and, whichever address mode has been applied, may be synchronised when in pulsed operation. An opto-coupled input is provided to monitor the state of the external power supply. The Sounder Control Unit with Isolator is fitted with a bi-directional short-circuit isolator and will be unaffected by loop short-circuits on either loop input or output. For further information on isolators please refer to datasheet PP2090, available on request.

The Sounder Control Unit with Isolator is normally supplied with a backbox for surface mounting and is intended for indoor use only. The backbox is moulded from the same white self-extinguishing polycarbonate as Apollo detectors. Three LEDs, one red and two yellow are visible through the front cover of the enclosure. The red one pulses or is illuminated continuously to indicate that the sounders are, respectively pulsed or switched on continuously. One yellow LED is illuminated whenever a fault has been detected. The other yellow LED is illuminated whenever the built-in isolator has sensed a short-circuit loop fault.

The Sounder Control Unit with Isolator responds to its own individual address set with a 7-segment DIL switch. It also responds both to a group address, set by means of a 4-segment DIL switch, and to a pulsed-mode synchronisation address which is embedded in the unit. It may be desirable, in alarm conditions, to switch more than one Sounder Control Unit with Isolator simultaneously. To enable this, units may be drawn together to form a group and given a group address which is common to all units in the group. When a device recognises its group address, it will process the forward command bits but it will not return any data to the control panel on that address. If it is required to confirm the status of the output bits of devices under group address control, it is necessary to poll all devices in the group by their individual addresses.

The Sounder Control Unit is used to control the operation of a zone of conventional sounders and report their status to the control panel.

Allows sounders to be operated continuously or be pulsed; 1 second on, 1 second off

May be synchronised with loop sounders