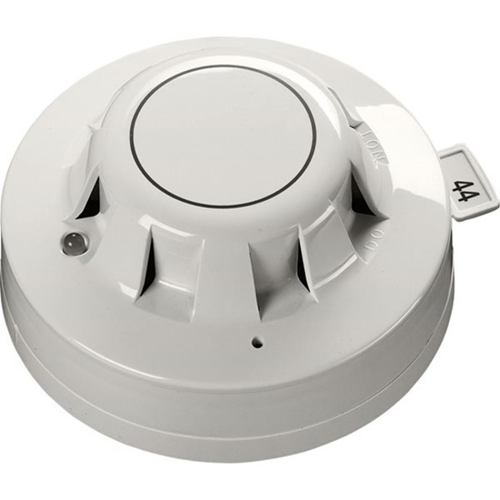 The XP95 range of analogue addressable fire detectors uses tried and trusted technology to give the best performance, and has unique features that benefit the installer and the end user. It is suitable for medium-to-large applications with simple installation requirements.

As it operates using digital communication, XP95 has a high immunity from corruption, and is, therefore, often preferred in a large system where life safety is critical. XP95 products are frequently used in commercial, industrial, financial, government, IT/telecoms and healthcare applications.

The detector is designed to be connected to a two wire loop circuit carrying both data and a 17V to 28V dc supply. The detector is connected to the incoming and outgoing supply via terminals L1 and L2 in the mounting base. A remote LED indicator requiring not more than 4mA at 5V may be connected between the +R and -R terminals. An earth connection terminal is also provided. When the device is energised the ASICs regulate the flow of power and control the data processing. The optical ASIC is controlled by the communications ASIC and pulses the IR LED. The signal from the photo-diode is processed by the optical ASIC and transferred to the communications ASIC where it is then stored. When smoke enters the chamber the photo-diode signal increases. The information to the A/D converter is updated once per second or when either the monitor or the preceding address is interrogated. Whenever the device is interrogated this data is sent to the control equipment. EN54 threshold alarm levels are calibrated within the processing ASIC. If the evice is not addressed within one second of its last polling and the analogue value is greater than the EN54 alarm level the alarm flag is initiated and the device address is added to the data stream every 32 polling cycles from its last polling for the duration of the alarm level condition, except when the alarming device is being interrogated. This can provide a location identified alarm from any device on the loop in approximately two seconds. The detector is calibrated to give an analogue value of 25±7 counts in clean air. This value increases with smoke density. A count of 55 corresponds to the EN54 alarm sensitivity level.

The XP95 optical detector uses the same outer case as the ionisation smoke detector and is distinguished by the indicator LED which is clear in standby and red in alarm. Within the case is a printed circuit board which on one side has the light proof labyrinth chamber with integral gauze surrounding the optical measuring system and on the other the address capture, signal processing and communications electronics. An infrared light emitting diode within its collimator is arranged at an obtuse angle to the photo-diode. The photo-diode has an integral daylight-blocking filter. The IR LED emits a burst of collimated light every second. In clear air the photo-diode receives no light directly from the IR LED because of the angular arrangement and the dual mask. When smoke enters the chamber it scatters photons from the emitter IR LED onto the photo-diode in an amount related to the smoke characteristics and density. The photo-diode signal is processed by the optical ASIC and passed to the A/D converter on the communications ASIC ready for transmission when the device is interrogated.